'The art of translation lies less in knowing the language than in knowing your own.'

You may think that translating English into Dutch is a simple task, but it's more complicated than you think, make no mistake. For starters, Dutch is not only a complex language to fully comprehend, but the nuances in Dutch are, as is with all languages, unique to the country and culture. There are, however, many (American) English words interwoven within the Dutch language, a process that has slowly been gaining in popularity over the years. The Dutch call it 'the Americanism of the Dutch language', amerikanisme. The Dutch people have a habit of adding American words and spelling to their speech or swapping Dutch words for English ones. They also tend to use a very pronounced American sounding 'r' in their Dutch articulation. It is mainly the younger generation, certain trendy celebrities and young influencers who love the heavily pronounced r. Hence it goes without saying that American English is very popular in the Netherlands.  However, a growing distaste and a heightened increase in criticism for these linguistic developments are evident within specific segments of the Dutch population. Some individuals fear that the Netherlands is slowly losing its cultural uniqueness due to the ever-increasing popularity of these Americanisms, and I tend to agree. 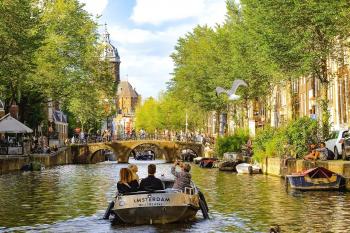 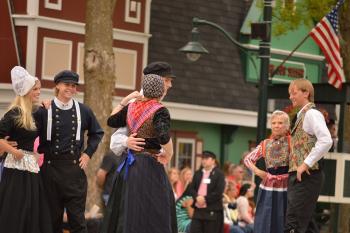 Let's start with typical Dutch grammar. In English, we use the definitive articles the, this or that to indicate something. An English native speaker will know precisely what you refer to when you use one of those words in a sentence. 'The' is furthermore one of the most commonly used words in the English language. Not so within the Dutch language, the Dutch have a choice of 5 different pronouns to indicate 'the', and boy, is it confusing!

In the Dutch language, people use several pronouns to indicate 'something', notably: die, de, dat, het and een. This is quite bewildering, and, for a foreigner, it is quite a feat to understand, let alone apply the correct pronouns in a sentence. You will encounter a similar form of grammar in the German language: der, die and das. It takes quite a bit of getting used to, and even then, there are no guarantees you will ever master it, so be prepared! Certain words also end with an additional 'e'. This also can cause much confusion.

Again, this is quite bewildering. Let me explain.

An adjective describes something; a red pen, a quaint village, an orange cat. An adjective says something about the noun that belongs to it; people, a thing or places. By default, there is an -e after an adjective, except for certain het-words and fixed definitions. This may sound easy enough, but it isn't because there are still several exceptions within this particular construction. I'm not going to elaborate further, so please just take it at face value.

With all this in mind, it might seem a better option to find yourself a translator to do the difficult job of translating your text for you. Of course, it might not be as cheap as when you do the task yourself, but I guarantee it will spare you a lot of headaches and considerable frustration.

If you need help translating a document or you are seeking advice, please contact me either by using the contact form or by emailing me directly at This email address is being protected from spambots. You need JavaScript enabled to view it.